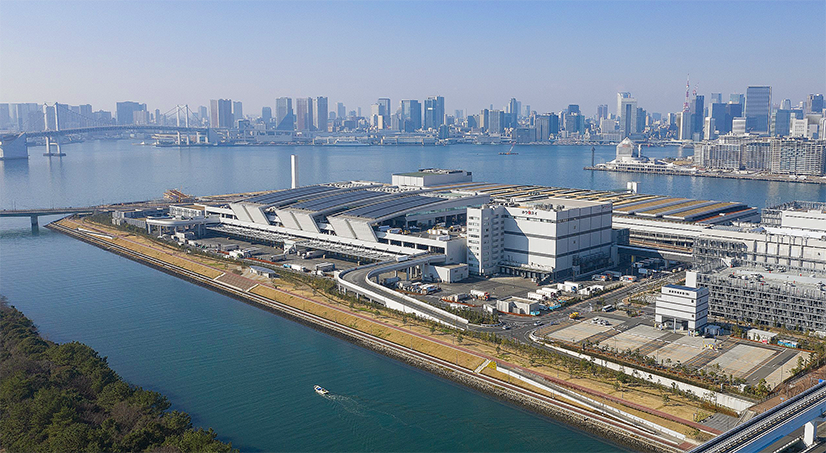 The island also has several other interesting attractions.

Don’t get the new station confused with the old Tsukiji Station on the Metro Hibiya Line in the old location southeast of Ginza – not on Toyosu.

There are also a large variety of high-rise condo residences + short-term apartments on the island.

For an excellent history of the fish market, see this article.

If you have time and also want to visit nearby Obaiba, check out this post.

There are several ways to Toyosu island, but the 2 quickest are on the Metro Yūrakuchō Line, or on the Yurikamome Line from Shimbashi Station. Keep in mind the Yūrakuchō Line is one of the longest in Tokyo, but it also offers a multitude of stops around the city. Toyosu Station is only 4 stops from the world famous Ginza area on the line (from Yurakucho Station/Y18). Taking Yurikamomé has the advantage that there are many other stops around the cluster of islands in Tokyo Bay, including Odaiba and at Tokyo Big Sight. In fact, Yurikamomé runs a ring around most of the islands.

Toyosu Station is smack in the middle of the island, but the fish market is actually several long blocks west towards the bay out on the long narrow western part of the island. It’s still within walking distance for most people.

If you have a little extra time, also check out Toyosu Gururi Park at the far western shore of the island – it provides epic views of Tokyo Bay + the Tokyo skyline (incuding the Rainbow Bridge). It’s one of the best kept photo secrets in Tokyo. You won’t be disappointed.

If you’re up for a long walk, you can also actually walk to the island from the Ginza area by following Rt. 473 southeast across the Sumida River, then cutting over east on Rt. 304 into Toyosu.

Toyosu Island. Tokyo Bay is to the left (west). There are 2 parts to the island: the smaller square area on the right (east) side, and the longer western part. The station is on the east side, and the fish market is at the far lower left (west) corner. Toyosu Gururi Park is at the extreme west side. Ginza is in the upper left corner.

The island’s main attraction is the huge new Toyosu Fish Market – where a huge variety of fish are bought, sold, and processed. Tours are available and parts of the facility are open to the public.

After the fish market, the next biggest attraction on the island is LaLaport TOYOSU – a huge mall with numerous attractions. There is also a Kinokuniya Bookstore, and a Tokyu Hands in the mall. There’s loads to do at LaLaport.

Just across from Toyosu Sanchome Park is Super VIVAHome – a huge home furnishings store occupying an entire block. There is also a big Yamada Denki inside.

In the very northeast corner of the western 1/2 of the island is the Tokyo Gas Science Museum which also has a huge outdoor park for kids. There is also a long jogging path along the shore.

In the southeast corner of the western 1/2 of the island is another small park called Toyosu Roku-chome Park.

On the very north side of the western 1/2 of the island are 3 large public soccer fields called MIFA Football Park.

Just south of that is a small art collective called teamLab Planets TOKYO.

Well that’s it for now. Toyosu has lots to offer. Even besides the fish market, the views, parks, and other attractions make it a worthwhile stop. If you’re in the area, check it out.

The Difference Between Tsukiji and Toyosu Fish Markets | tsunagu Japan

Toyosu Market Guide – Everything You Need to Know!

How to photograph Rainbow Bridge from Toyosu Gururi Park

21 Best Museums In Tokyo To Visit