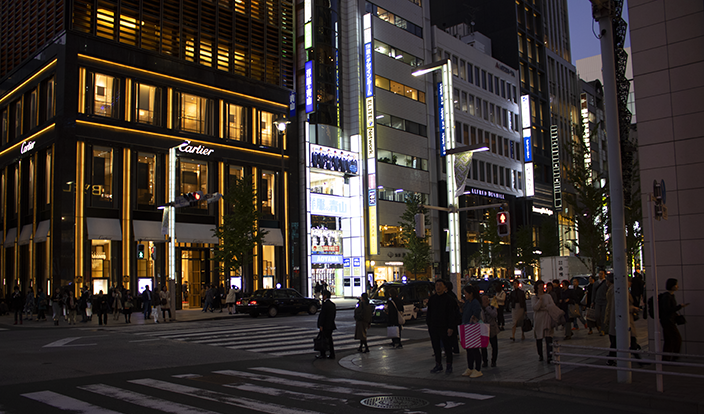 The name “Ginza” is synonymous the world over with luxury + wealth. The name itself means “Silver Mint” – because when the Tokugawa Shogunate moved Japan’s capital from Kyoto to Edo (now Tokyo) in the early 1600’s, the largest silver mint in Japan was relocated to Ginza as well. (The name Tokyo actually means “Eastern Capital“).

Ginza is an astonishing place – not just for its luxury stores, and upscale vibe, but there’s a feel to the place all its own – let’s just call it an air of positivity. It’s also centrally located on the east side of Tokyo which makes it a good jumping off point to other parts of the city. To the north is Tokyo Station and the Marunouchi area – the central finance district of Tokyo, to the west is the Imperial Palace and Hibiya, and to south is Shimbashi.

One can wander the backstreets of Ginza, especially at night, and be dazzled at every turn.

There is also a large-scale diorama of late 19th century Ginza at the Edo-Tokyo Museum.

A typical store in Ginza.

Be sure to first read our Yurakucho Superguide as it contains all the info you need on the main station near Ginza – Yurakucho, and the surrounding area to the west of Ginza. There are also smaller underground stations on the Ginza Line, Marunouchi Line, Hibiya Lines around Ginza at street level – but there is no central above-ground Ginza Station, surprisingly.

Tokyo Station is just to the north of Yurakucho and Ginza and is an easy walk in just a few minutes. Hibiya and the Imperial Palace are just to the west of the TIF and are also an easy walk. If you start early enough, you can see all 3 areas in one day – although that would be a very full day. Ginza alone can easily take 12-14 hours to fully explore and possibly a few days if you really want to see everything in-depth.

For ease of access, other than Yurakucho Station, the Ginza Metro Station is probably the best bet for most people – it also stops at many other interesting areas on the Ginza Line including Asakusa (its eastern terminus), Ueno, Kanda, Shimbashi, Toranomon, Akasaka-mitsuke, Omotesando, and Shibuya (its western terminus). It pops up onto the street in central Ginza with several different exits with the main one being around 35°40’19.54″ N 139°45’50.72″ E.

A few blocks east of the center of Ginza Crossing is Higashi-Ginza Station on the Hibiya Line (Higashi is the Japanese word for east, nishi means west).

Ginza lies to the southeast of Yurakucho in a roughly 5-block area. The 2 towns are right next to each other. Most of Ginza is laid out in a grid with a major central street running in both the north-south, and east-west directions. Just to the northwest of Yurakucho is the Tokyo International Forum – the elongated bldg. shown in the upper left of the photo above. Yurakucho Station is just south of that, and Ginza is the area in the lower center area of the frame. The Hibiya area is in the upper left corner.

First, the Yurakucho area itself is worth a look. Adjacent to the Hibiya area, both can easily take a day to explore. Both are worth it. The north end of Yurakucho is the gateway to central Tokyo from the south – it’s well worth it to explore this area. See our Yurakucho Superguide for a comple guide to the area.

Tokyo International Forum to the North

Also a must-see is the Tokyo International Forum just to the north of Yurakucho. The TIF has a courtyard to the west with lots of cafés, restaurants, and shops. The buildings to the west are office + hotels. Definitely check the area out. North of that is Tokyo Station. The Forum also hosts the Oedo Antique Market on the 1st + 3rd weekend of every month right in the courtyard.

Yurakucho facing east. Ginza is straight ahead, Yurakucho Station directly behind the camera. The tall square bldg. ahead is MARRIONER GATE – a large shopping complex. Tokyo Kotsu Kaikan is a small shopping center built in the 1970’s. OIOI (pronounced Marui) is a large depato (department store) on the right.

Facing east crossing from Yurakucho into Ginza at MARRIONER GATE. Yurakucho is behind the camera. On the right is the new UNIQLO Ginza.

Hibiya just to the southwest.

There is also Metro Hibiya Station nearby in Hibiya, shown on the left here.

Inside the Ginza Metro Station.

On the Metro Ginza Line.

West side of Yurakucho Station facing east. Pass through the tunnel at the bottom of the frame to get to the east side. Ginza is just on the other side of the tall building.

To get to Ginza from Yurakucho cross Sotobori-Dori from any of the side streets to the east. You may want to start at either the north or south end, and criss-cross the Ginza streets in a pattern since they are laid out in a grid. The main center of Ginza – Ginza Crossing and its world-famous Wako Building is down about 3 blocks east at 35°40’17.12″ N 139°45’53.76″ E. If you cross at the south end of Yurakucho near the new Tokyu Plaza around 35°40’20.09″ N 139°45’49.73″ E, you will be at the Wako Bldg. in 3 blocks. A famous corner Nikon (pronounced nee-kon, not nigh-kon) camera store and the Hermes building are on this corner as you cross. 2 blocks to the east is the SEIKO Watch Museum on the left.

The famous Wako Bldg. facing north. Yurakucho and Tokyu Plaza are off to the left out of view. So is the SEIKO Watch Museum. Sony Showcase is on the right out of view. If you turn right here and go to the Mitsukoshi building’s roof there is an open-air garden, shops, and several cafés. Matsuya Ginza, which has one of the best food basements in Tokyo is straight ahead on the right. The Ginza Apple Store is down on the left.

Mitsukoshi‘s rooftop garden. Check it out. World-famous jeweler Mikimoto is across the street.

Tokyu Plaza is well worth a stop in and of itself – it has a lot of great restuarants on the top floor + a very nice open-air rooftop garden. There is also a huge indoor café on one of the upper floors with floor-to-ceiling windows which provide a spectacular view of Ginza at night. It’s just to the south of the Yurakucho area.

Across from Tokyu Plaza Ginza at night.

Inside Tokyu Plaza there is a café with soaring ceilings and this awesome view.

The Hermes Building across from Tokyu Plaza Ginza.

About 3 blocks southeast of Matsuya Ginza around 35°40’10.59″ N 139°45’53.82″ E is the spectacular new Ginza Six complex. A multi-use mall with shops, restaurants, and other attractions, Ginza Six is worth a stop. It also features a very nice open-air terrace shown below:

Namiki-Dori is one of many avenues running east-west in Ginza. Yurakucho is just a few blocks to the right. There is also a Metro Ginza subway portal on the corner.

Just 1 block east of the Yurakucho crossing around 35°40’34.43″ N 139°46’09.47″ E is a bright new complex called Tokyo Square Garden. If you’re in Ginza it’s a must-see. Loaded with new shops, malls, restuarants, and offices, it’s one of Ginza’s up and coming addresses. There is also a WeWork co-working space inside. Check it out.

Food options are endless in Ginza, and much of the fare is ultra-luxury high end restuarants + confectionary stores. There are also wineries, delicacy shops, and even upscale ramen places. Great Sushi places abound. You may want to do some web research before you go to determine which places you want to eat at since there are so many it’s impossible to catalog them all here. There are plenty of good places in Yurakucho as well including the Miami Café, OIOI and LUMINE food floors, and the Matsuya Ginza food basement, which is one of the best in Tokyo. Many of the large depato have great food on their upper floors, which is a common trend in modern Tokyo.

If you explore the backstreets you will find plenty of smaller ramen and other food shops – authentic local Japanese cuisine. This area is called Yurakucho Concourse and is directly under the train tracks to the east side of the station.

On top of Tokyo Kotsu Kaikan is the Ginza Sky Lounge restaurant – a laid back understated restaurant with a great view overlooking Ginza.

2 blocks east of Yurakucho around 35°40’20.59″ N 139°46’03.08″ E is the deluxe Kit-Kat Chocolatory. For some reason Kit-Kat is deemed a western luxury delicacy all over Japan – not the commodity candy bar it is considered in US supermarkets. There are endless flavors + styles of Kit-Kat in Japan, unlike in the west. If you like chocolate, this shop is a must-see in Ginza. There is also a new monster Kit-Kat store over in Shinjuku across the city. You can buy some of the Japan-themed Kit-Kats online over at yummy bazaar.

Also be sure to check out Le Chocolate De H Ginza.

Just on the border of Ginza on the west side and Shiodomé on the east, there is this little Don Quijote 100¥ shop (known to locals simply as Donki). Like most Don Quijotes in Tokyo, they have a wide variety of goods packed into tiny aisles. They also have cheap snacks + cheap coffee. You can get a non-perishable 1 liter bottle of UCC Coffee for $.88 cents. Oddly, this Don Quijote has a wide variety of cheap but good bicycles for sale out front. They even have one made by GM’s Hummer brand. Definitely worth a stop.

Around 35°40’09.81″ N 139°46’03.64″ E, about a block or 2 east of Ginza Crossing is the Kabukiza Theater – one of Japan’s largest, and oldest Kabuki theaters. Kabuki is an ancient form of morality play and has survived to the modern day. The theater was destroyed by World War 2 Allied bombing but was rebuilt. There is also a tiny Japanese garden on the theater’s rooftop. Well worth a stop to check out some of traditional Japan. Shows are expensive – expect to pay a few hundred dollars. If you want quick, direct access to the theater by subway, take the Metro Hibiya Line to Higash-Ginza Station and exit to the street.

Well that’s it for now. There are endless things to do in Ginza and you can easily spend a few days here. It’s an absolute must-see if you’re in Tokyo.

Facing south on Sotobori-Dori – crossing into Ginza on the left from Yurakucho on the right. Tokyu Plaza Ginza is the tall black building in the distance. The shopping complex on the right is called Ginza | Nz.

Facing north on Sotobori Dori. Turning right here leads into Ginza. Yurakucho is on the left.

Another view of Hermes across from Tokyu Plaza Ginza.

Near the Hermes Bldg. shown above is the interesting Ginza Sony Park. There’s a cool little underground museum called Design Museum Box down a staircase at street level right next to the Hermes Bldg. Worth a quick look. There’s also a newly opened PlayStation museum in the basement.

Head down this starwell for the Design Museum Box.

Just down the street from the Wako Bldg. is the great Matsuya Ginza department store (depato in Japanese). The food basement (Depachika) is really awesome and has lots of nice gifts + stuff to eat.

Another view of the Tokyu Plaza entrance.

On a Ginza street at dusk. The Oslo Coffee shop is just on the left.

Endless adventures await you on the backstreets of Ginza.

Another view of Matsuya Ginza.

Cafe Paulista in Ginza: Japan’s oldest existing kissaten is model for coffee shops across the country

Yurakucho Station is one of the best Shinkansen-spotting places in Tokyo. Ginza is directly behind the camera to the east.

This video shows other views of the area around Yurakucho Station. Bic Camera and Tokyo International Forum are shown behind the tracks in this thumbnail.