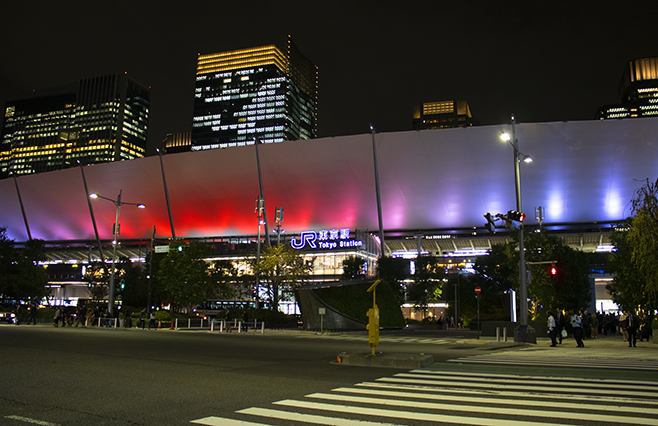 For general info on Tokyo Station see Part 1 of our series.

The east side of Tokyo Station is called the Yaesu side (named after the 17th century foreign Samurai Jan Joosten).

It’s the newer more modern side of the station compared with the west Marunouchi side built in the early 1900’s.

For access + area layout info for the station see Part 1 of our post which has all the ways to get to Tokyo Station.

The east side is one long continuous sidewalk on the outside with a large bus stop + loading area, a central entrance, the large DAIMARU depato (department store), and an elevated walkway with some shops called GRANRoof. There is also a very cheap hidden luggage store/forward place in a hidden basement at the very south end.

Underneath the east side are endless corridors, passages, and a huge shopping mall. The main street running north-south in front of the east side is called Sotobori Dori. Across the street to the east are shops, the huge Yamada Denki (an electronics shop called Concept LABi), and some very interesting side streets with lots to see + do. There are also some very nice hotels on the east side.

Just to the north of the DAIMARU depato is a very upscale hotel – the Shangri La Hotel Tokyo. You can’t find a better or more convenient hotel in Tokyo, but it will cost you dearly – close to $500/night or even more during peak tourist season in the spring. The only closer hotel is the Tokyo Station Hotel itself – inside the station.

Facing south. The station is center right. The DAIMARU building is right of that, and the Shangri La is on the far right. On the left is the Yamada Denki Concept LABi store. The street shown is Sotobori Dori. Just down to the left past Yamada are some interesting side streets that are a must-see.

At the very south end are some shops on the outside including a very nice 2-story waffle house. If you turn right and follow a small corridor past the corner, then take the nondescript elevator down, you’ll find a hidden luggage storage/delivery service with very cheap rates. This place comes in incredibly handy when going to/from the station with luggage. If you are arriving in Tokyo you can drop your luggage here overnight, then come back the next day and pick it up. They can also deliver to your hotel.

The Yaesu Central Entrance. The huge staircase + escalators lead to the underground shopping mall. The stairs on the left lead up to GRANRoof.

Just north of the Shangri La around the corner to the left is the smaller north, or Nihombashi entrance to the station. This entrance is mostly used for buses, but also has some other unique features – the Sagawa luggage delivery/storage service is here, as are a few restaurants and a large bank of coin lockers. (Nihombashi is the district just north of Tokyo Station).

The large bank of coin lockers along the north side. An entrance to 1st Avenue underground mall is on the left.

Along the Yaesu side. The bus loading area is on the left. The Yaesu Central Entrance is just to the right out of frame. Small food shops are at the far end. Just behind the camera is the DAIMARU depato:

The roof mezzanine level which has many shops on the left side. This level also affords a spectacular view of the city to the east.

Surprisingly, just outside is a free + large place to park bikes. And you don’t even need to lock them. Hardly anyone in Japan steals anything.

We described the vast tunnels + platforms inside the station in Part 1 so we won’t go into it again here. Suffice it to say there are 2 sides to the station and underneath are vast shop/restaurant areas with endless things to eat. It’s so vast it’s easy to get lost. You’re going to need a lot of food after spending hours walking around the place and up + down stairs.

In one of many corridors inside Tokyo Station.

After walking miles in the station, you will be ready to eat.

Inside the station there are endless food options + goodies.

Just east of the station and 1 block south of the Yamada Denki building is the entrance to a small side street known simply as Sakura Street:

If you’re visiting the station for the 1st time, this street is a must-see. But wait until after dark when the street comes alive with restaurants, cafés, pubs, and a host of other cool places to check out. There are also a few other good smaller hotels on this streets such as:

One of many parallel side streets near Sakura Street. Lots to see + do.

At the end of Sakura Street just 2 blocks east around 35°40’49.19″ N 139°46’20.99″ E is another major north-south street with lots to do. There’s a huge museum here (Artizon Museum), lots of skyscrapers, and a huge Takashimaya depato. The restaurant level on the top floor of the Takashimaya Annex is especially good. If you want a really good hamburger, try Brozer’s on that floor:

More Cool Stuff On the Backstreets

If you wander around the backstreets you will find a surprisingly awesome array of cool things to do + see – not just on Sakura Street, but on all of the streets. Places such as these:

There are huge banks of paid coin lockers around the station. The largest banks are near the shinkansen entrances, along the north corridor, and along the west corridor. To learn how to use them, see Part 1. You can pay by cash, coin, or electronic Suica card. (the Japanese word for card is a Katakana loan word from English: cardo).

The lockers can come in handy when entering or leaving the country, going to other cities in Japan, or if you are just taking a day trip and don’t want to carry everything with you. They are usually totally secure.

Large lockers. The red indicator usually means they are in use.

Locker payment machine. The touchscreen at the top indicates how you would like to pay, and the small oval below it is the Suica card reader. After indicating payment by Suica, just slap your card on the reader and the price will be deducted from the card. You can also use bills + coins.

Well that’s it for Tokyo Station. We’ve barely scratched the surface here. The station is vast and you can easily spend days exploring it. It’s a must-see on any trip to Tokyo. Don’t miss it.

Across from the north entrance is this employment agency – PASONA.

Inside the north entrance.

The underground Yaesu Shopping Mall which is vast.

Heading down into the Ginza Metro subway line.

Inside the underground 1st Avenue mall.

Inside Concept LABi. The wall of iPhone cases alone is gigantic.

The view east from the roof mezzanine.

One of many restaurants on the roof mezzanine level.

The R.L. Waffle Café at the very south end.

One of the Shinkansen (bullet train) entrances. Note the bank of coin lockers on the left.

3 of the major Metro lines in Tokyo Station: Marunouchi, Chiyoda, and Tozai lines.

There are even entire grocery stores inside the station.

A specialty store inside DAIMARU.

Entrance to the Shangri-La Hotel. There is also an upscale Sarabeth’s above on the 2nd floor. The station is to the left, out of frame.

Area to the east of the station.

Area northeast of the station.

The Annex has some really great places to eat.

Stairs on the Yaesu side leading up to GRANRoof mezzanine.

At the south end of the Yaesu side. The hidden luggage elevator is just to the left.

Heading into the north entrance.

In the underground shopping mall.

And the ubiquitous Hello Kitty shop in the underground mall.

For many interesting vids around the station, see Part 1.