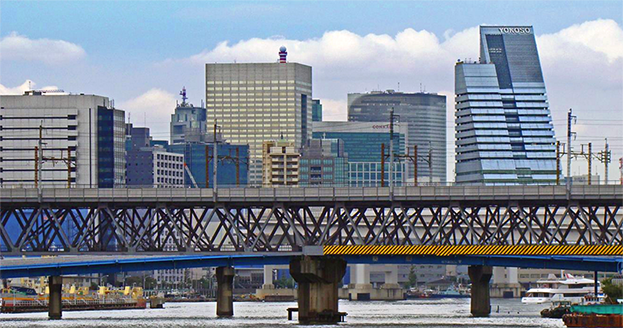 Worth it? Do not miss it.

The island has a very nice official site.

Tennozu Isle lies just east of Shinagawa – a major cosmopolitan destination in southwest Tokyo. You can get to Tennozu either on the Tokyo Monorail, or by walking from Shinagawa Station a few miles to the west. Note that the Tokaido Shinkansen (bullet train) also stops at Shinagawa Station, making it an easy jump-off/arrival spot from other parts of Japan. You can also walk across onto the island from any 1 of the 3 bridges on the north, west, or south sides.

The island also has easy access to Haneda Airport, just to the south.

The island is rather small, and is sandwiched in between 2 other islands to the north + east. There’s a huge 3-diamond baseball park at the island’s south end.

Tennozu Isle, shown bottom, center is one of the smaller islands in Tokyo Bay. Shinagawa is just off to the left.

The island is known for its art community and you can find several art galleries + festivals here. It’s also known for its illuminations at various holidays year-round – especially at Christmas + New Year’s.

After the arts, hands down, the Tennozu’s biggest attraction is TY Harbor at the northwest corner of the island. TY Harbor is a large brewpub serving beer and food (which is actually quite good). The atmosphere is great. Reservations are required in advance.

On the northeast side of the island you can take the 2-hour Crystal Bay Cruise around Tokyo Bay starting at 2,000¥ (around $20 USD). If you want some great views of the Tokyo waterfront, this is the way to do it.

If you cross the small Isle Bridge at the southwest corner of the park, you’ll come to Higashishinagawa Sanchome Park – another fine park on the Meguro River. There’s also a free DoCoMo Bike Share if you’re looking to find a free bike to ride around. You can speed up your visit to Tennozu by grabbing a bike here, riding back onto the island, then returning the bike when you’re done. It’s a very short walk to the park from the island. The DoCoMo bikes are electric-assist – making it easy to get back if you’re feeling tired.

If Tennozu Isle isn’t enough for you, you can head back to the mainland and Shinagawa itself – which is about a mile to the northwest. It’s an easy + quick train hop from the island. Of particular note in Shinagawa is the huge Shinagawa Central Garden right smack in the center of town – a popular spot with locals. There’s also a massive food court on one side of the park. The park also has Christmas/New Years’ illuminations in the winter.

Tennozu Isle is a great little day trip with easy access in southwest Tokyo and is well worth a look. You can easily see everything in 1/2 a day and bolt out w/o spending too much time. While it’s a tiny island without a lot to do, it’s still a fun, quick walk. So if you’re in the Shinagawa area, pop in and give it a look.

Tennozu Isle | A Different Side of Japan

State of the art | Time Out Tokyo

5 Brewpubs Where You Can Explore Craft Beer