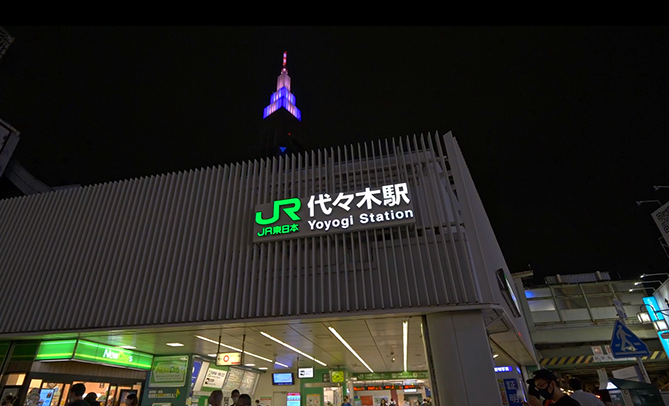 Worth it? For a quick look.

Yoyogi is a small town just south of Shinjuku. In fact it’s just one stop south of Shinjuku on the JR Yamanote Line. It’s close enough to walk. Some of the side streets + alleyways are worth a look. There is also a huge multi-use shopping complex called Takashimaya Time Square just north of the station. For a quick trip + walk around, it’s worth a stop. There are various other non-Metro subway links into Yoyogi Station listed over on the Wikipedia article.

The most famous + enjoyable part of Yoyogi is Yoyogi Park – a huge green open space popular with families and young hipsters. In mid-Oct. the entire park turns a brilliant yellow/red with the leaves on the trees preparing to drop for the winter.

Just behind Yoyogi Station to the north east towers the NTT DoCoMo HQ, better known to locals as “The Bubble Bulding” because it was built during Japan’s “bubble” economy era – the 1980’s.

Also across from Yoyogi Park is the National Gymnasium. At the south end of the park is small bridge to a large open concrete park area with benches.

Just to the southeast of Yoyogi Park – and 1 stop south of the station is the world-famous Harajuku/Omotesando area – so you can make a stop there afterwards, if you have time. Just take the JR Yamanote Line again 1 stop south to Harajuku Station. A brand new Harajuku Station just opened in 2020.

One more thing to be aware of is that during rush hours (5AM-8AM and 5PM-7PM Shinjuku Station is an absolute madhouse. If you do take a train there during those hours, get ready to be squashed like a sardine in the train.

Yoyogi Station lies at the bottom of this map (top is north). At the north end of the map is the massive Shinjuku Station – the busiest rail station in the world with 2 million people passing through every day. Center right on the map is the towering NTT DoCoMo bldg., and just east of that is Shinjuku Goyen Park. Takashimaya Times Square is just north of the NTT bldg. Yoyogi Park and National Gymnasium is just to the southwest out of frame. One JR stop to the south is Harajuku.

Yoyogi Station south entrance. The main square is just to the left.

There actually isn’t much in Yoyogi itself beyond the park. There is one small intersection to the west of the station lined with shops, and a street running north into central Shinjuku that is worth a stroll. The area to the west is mostly a hilly residential area. To the immediate right of the station is a small underpass which leads to the street running north directly into Takashimaya Times Square.

Station area facing south at night. The small rail underpass is just to the left.

Facing southwest. There is a large FamilyMart conbini (convenience store) just on the right. There are also a number of good cafés around. Above the FamilyMart are a couple nice yakiniku (steak) places. Head straight down the street ahead to the south for Yoyogi Park a few blocks down.

Another front view of the station.

Facing east. The pedestrian underpass is just ahead. Head straight then left to get to Takshimaya Times Square. Also note Panda Sugar just on the corner to the right.

90 degrees to the left and you’re facing north on the main street. The triangular bldg. barely visible in the distance is the MyLord Bldg. in Shinjuku. There is also a 2nd entrance to the station just on the right behind the truck in this photo.

Instead of heading straight, you can also head left down this little side street. Note the Doutour café straight ahead, and a Pronto Café on the left. Doutour has some reasonably good food very cheap.

From the main west intersection head south down the center street for a few blocks and on your right will be Yoyogi Park. Admission is free and it’s a huge park – about a mile across. You can spend nearly a day there walking around. The park is especially nice in the fall and spring. On weekends the park is packed with families and kids – so you may want to go in the middle of the week to avoid crowds if possible.

You can also get directly to Yoyogi Park by taking the Yamanote Line 1 more stop south to Harajuku Station – then exit, turn right, then turn right again at the next intersection – just up the street on the right is Yoyogi Park.

The south entrance @ Yoyogi Park in the fall.

A map near the south entrance.

At the park facing north in fall. The NTT bldg. in Shinjuku is visible in the distance.

The bridge at the south end of the park.

The small open area south of the park.

National Gymnasium. Harajuku/Omotesando is just down the street on the left.

Harajuku/Omotesando facing east. New Harajuku Station is the grey bldg. on the left. Entrance to Meiji Shrine is just to the left of that out of frame. Entrance to Omotesando is straight ahead. Yoyogi Park is back up the street behind the camera.

As we mentioned, just to the south of Yoyogi Station is Meiji Shrine – a monument to Japan’s 19th century emperor Meiji. Meiji was most famous for the Meiji Restoration – the opening of Japan to trade in 1868 and the ending of the absolute rule of Shoguns as commanders of the country. You can walk to Harajuku Station where the southern entrance is, or you can take the JR Yamanote line further south 1 stop and exit there. The entrance is just behind the station. One of the most notable features is the huge wood Torii Gate at the entrance – one of the largest in Japan.

Just up the street from Yoyogi Station is a huge multuse complex called Takshimaya Times Square. The main building is mostly huge department stores and restaurants but there are a lot of smaller interesting shops around the main building. The top 3 floors of the main building are all restaurants. There is also a small outdoor area with benches on an overpass with glass walls. The B1 level is all food. Here’s the official website and shop list.

Just to the east of Takashimaya Square is the huge and amazing Shinjuku Goyen National Garden. This park has amazing paths to stroll around and a huge lake. Unfortunately there’s no entrance on the west side and you’ll have to head to the north side around 35°41’18.02″ N 139°42’28.79″ E to get to the entrance. There is a small entrance fee, but it’s not much. There is also a huge flower garden in the park. It’s worth a stop if you have a few extra hours to kill.

As we mentioned, there are a few places to eat around the station: one of the cafés, one of the steak places, or something from a conbini. The convenience store food in Japan is much better than that in the US. Pre-made sandwiches are actually fresh + natural without all the preservatives and chemicals found in western convenience store food. Or you could go to a place in Takshimaya Times Square or even in Shinjuku to the north. There are a lot of great Depachika (short for Basement Department) in the depato (department stores) in Shinjuku including Keio and others. Or you could try one of the upscale places in Omotesando. There are lots of great places there including a MOS Café, and several pancake shops. There are also several western fast food places near the station.

Well that’s it for now. Yoyogi + Yoyogi Park can make a fun day, or 1/2 day. If you have a little extra time, be sure to also check out Takshimaya Times Square and Shinjuku Goyen. It’s possible to do all 4 areas in one day, but it will be a full day. Enjoy!

West facing New Harajuku Station which opened in 2020. Just to the left around the corner is the entrance to Meiji Shrine. Just beyond that to the west is Yoyogi Park.

New Harajuku Station under construction in 2020.

3 more views of the NTT building from Shinjuku.

The Sound of the Mountain – Wikipedia