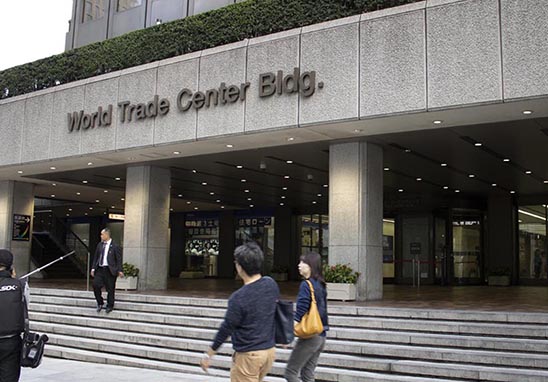 Worth it? For the observation deck + restaurants.

The Tokyo World Trade Center was completed in 1970, 2 years before the former US World Trade Center. It offers an observation deck, offices, a conference center, and underground shops + restaurants. It also has a large wedding venue. For a year or so it was the tallest building in Tokyo in the early 1970’s. In the basement is also a station for the Tokyo Monorail.

To get to World Trade Center, take Toei Asakusa Line (A09), or Toei Oedo Line (E20), and exit Daimon Station to the street. You can also walk or bike fairly quickly from Tokyo Tower to the north, or Hamamatsucho to the west (it’s actually in south Hamamatsucho). It’s also close to Shimbashi to the northeast. Also just to the southeast a few blocks is Shiodomé. The Toei Ōedo Line has over 40 stops and is huge.

Also note that the eastern terminus of the Toei Asakusa Line is in Oshiagé, where Tokyo Sky Tree is.

A place to park your bike is out front.

Heading north to Tokyo Tower. This street is actually an interesting stroll. Lots of restaurants + shops along the way.

Facing north. WTC is the tall bldg. on the left with the white top. Shiodomé is at the top, and Takeshiba Pier is to the right. Kyu-Shiba-rikyu Gardens is in the center.

The observation deck is on the top floor. Admission is 600¥ ($6 roughly) as of this writing. It has 360-degree panorama windows and a decidedly 1970’s decor. This is the must-see attraction at the WTC, so don’t miss it.

The famous western view of Tokyo from WTC’s observation deck.

Looking down at the street from the observation deck.

If you look to the north from the observation deck, you can see Tokyo Sky Tree in the distance.

In the basement of WTC are shops, restaurants, a huge parking garage, and some art exhibits. There is also a rail station for the Tokyo Monorail.

Just to the south of WTC is a nice small Japanese garden called Kyu-Shiba-rikyu Gardens. Since it’s so close, it’s worth a stop – especially in the spring or fall. There’s a large pond with walking trails, so stop in and have a look.

Just to the east on Tokyo Bay is Takeshiba Pier. It’s only 2 blocks past the gardens, and well worth the walk for the view. There’s also stuff to do at the pier, and restaurants, so check it out. There’s also a station in Takeshiba on the Yurikamome Line. So if you’re coming from Shimbashi or Odaiba, that may be faster than the subway. The waterfront affords great nighttime views of Rainbow Bridge and Odaiba.

In 2014 the building was purchased and is scheduled to be demolished and replaced with a new complex. So if you want to see it, best hurry before it’s gone.

Well that’s it. Enjoy World Trade Center. It’s a quick + easy stop and you can spend a few minutes or a few hours wandering around. The 360 degree view of Tokyo is not to be missed.