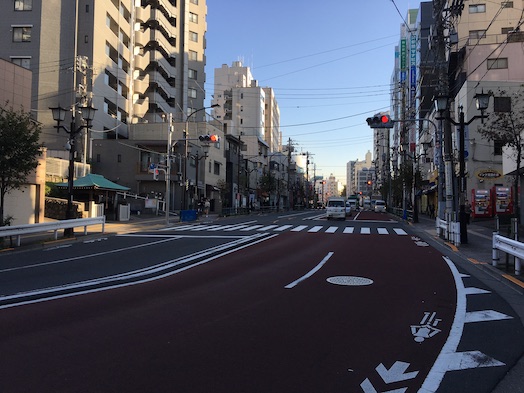 Worth it? For a quick look, or on the way to Itabashi, Sugamo, or Tokyo Dome City.

Komagome is a small town in northwest Tokyo in between Tokyo Dome City to the south and Itabashi to the north. It’s on the JR Yamanote Line and Tokyo Metro Namboku Line. There’s not a lot to do in the town, but it’s interesting nonetheless. Perhaps the town’s most interesting feature is Rikugien Gardens (see below). The town also has a small lively nightlife backstreet area down a hill below the station away from the main part of the town. Its sister city Sugamo is just to the west.

There is also a small bank of coin lockers inside the station for around $4 each.

Central Komagome. The station is lower center left. The hill down to the backstreet area is the red-grey-lined street to the upper right of that. The alleyway area is right center. Rt. 455 runs north-south through the town. The APA Hotel is at the upper left corner to the northwest. Rikugien Gardens is just to the lower left out of view. Up is north.

The main feature of Komagome is its mainstreet – Rt. 455 – which runs north-south through the town. At the south end of the town is Rikugien Gardens (see below). There is also a back alley area down the hill behind the station (also see below).

Rt. 455 – the central road through Komagome facing south. The station is just down on the left. The APA Hotel is just to the right, out of frame.

The central street through Komagome: Rt. 455.

The center of town facing south on Rt. 455. There’s a large conbini (convenience store) across from the station on the right.

Good cafés abound in Komagome. Be sure to check out the Niki Bakery + Cafe a few blocks south on Rt. 455 on the left.

There are numerous others in the area.

Facing west south of the station on Rt. 455 leads to the crosswalk shown below. Just to the left on the corner across the street is the entrance to Rikugien Gardens – a must see. Admission is 300¥-400¥ but well worth it. The gardens are huge and you can spend all day there looking at the lake and all the plants and trees. Also note the “31” (Baskin Robbins) just to the right. For some reason the Japanese call Baskin Robbins “31” – all because the 31 is more prominent on signage – and most likely because more Japanese know the western decimal numeral system than know full English.

Crossing to Rikugien Gardens on the left (out of view). As a footnote, if you head west down the side street shown here, after a few blocks you come to Komagome’s sister city, Sugamo. See our full post on Sugamo for more info.

If you’re willing to walk about a mile further north on Rt. 455 and back, around 35°44’34.58″ N 139°44’45.66″ E there are also the Kyū-Furukawa Gardens and an old museum called Otani Museum – both are worth a look for a little bit more of a hike. A mile further north beyond that on 455 is Oji Station, which is also on the Metro Namboku Line. Also in Oji is Ōji Jinja Shrine.

Just down a hill to the left of the station entrance is a hidden backstreet area called Komagome Ginza which comes alive at night with restuarants, shops, bars, and pachinko parlors. To get there, head down the street shown below just left of the station. At the bottom take the first right on a tiny side street. The alley area is just on the left. You can also get to it by traversing down to the bottom level of the station from inside and exit on the left (north entrance). The alleys are well-lit at night with white LED lights and make for a fascinating evening stroll. There are plenty of good restuarants. There is also a huge free bike parking lot just at the lower exit to the station.

Head down this hill and turn right at the bottom for the hidden alley area.

Heading down the hill. At the bottom, turn right for a tiny side street leading to:

A stroll through the nightlife area next to the Three Seven pachninko parlor.

One of many great restaurants on the backstreet alley area.

There are several good low-cost hotels in the area. The obvious choice is the APA Komagome a few blocks north of the station. During off-season you can get a nice room for around $60-$70/night. APA hotels are spotless, affordable, conveniently located, quiet (they have soundproof windows), and easy. They usually make your trip much easier. APA has a chain of these hotels all over Japan.

Typical APA hotel room – very small, but clean, usually with a small desk, and large TV. Most also have a micro-refrigerator as well.

There is also the nice Hotel Mets Komagome right next to the station. There is also Business Hotel Plaza Komagome, down by Komagome Ginza but it’s not quite as deluxe.

Well that’s it for now – enjoy a walk or ride around Komagome. It’s a nice little day trip and worth a look.

Another view of the front of the station.

The large bike lot at the bottom of the station.

The lower rear entrance to the station down the hill.

North up Rt. 455 is this large wooden temple with interesting architecture. Worth a stop.

Komagome: A Quaint Town in Tokyo

10 BEST Things to Do Near Komagome Station – Tripadvisor