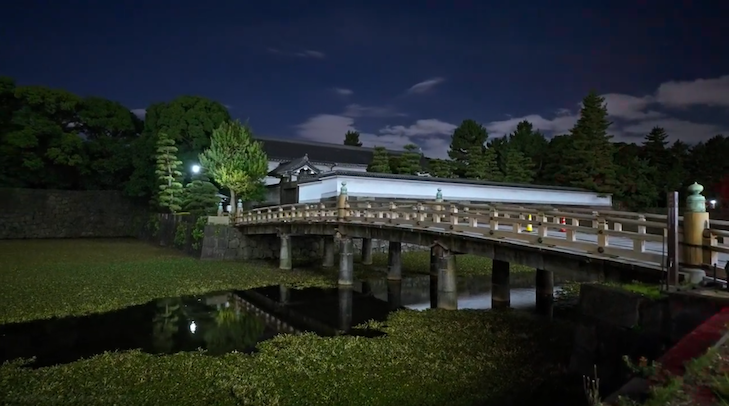 Just north of the Imperial Palace is a huge park called Kitanomaru Park.

The park includes a huge pond, gardens, and the Nippon Budokan – which was originally built as a Judo arena for the 1964 Olympics.

The Imperial Moat runs along the west side. If you head northwest or further west and down south a bit, you’ll arrive at the fabulous Akasaka. Just across the street to the south before the Imperial Palace is the Imperial Guard Division HQ. Just east of that is the Japan National Archives. Just across east of that on Uchibori-Dori is the Parkside Building, which is down into Otemachi.

Uchibori-Dori, facing west. The entrance to the Imperial Palace is on the left, the Parkside Bldg. on the right. Kitanomaru Park is ahead up the street on the right.

Entrance is free and is easiet on the south side of the street at the Tayasumon Gate near the Imperial Palace from the main street. There’s a small bridge to cross the moat into the park. You’ll be right at Nippon Budokan so head southwest around the walkway and further south into the park.

There are also a few other small things to do, and shops including an ice cream place and a few small other food shops.

The leaves in the fall are spectacular.

If you’re in central Tokyo, you don’t want to miss it.

A visit to “Kitanomaru Garden” – This is where you’ll find your new favorite museum! – Visit Chiyoda

Tokyo Imperial Palace: Mega Guide for What to Do and See | Tokyo Cheapo

Tokyo Travel Tips. Advice, Reviews, How to get Around, Things to See