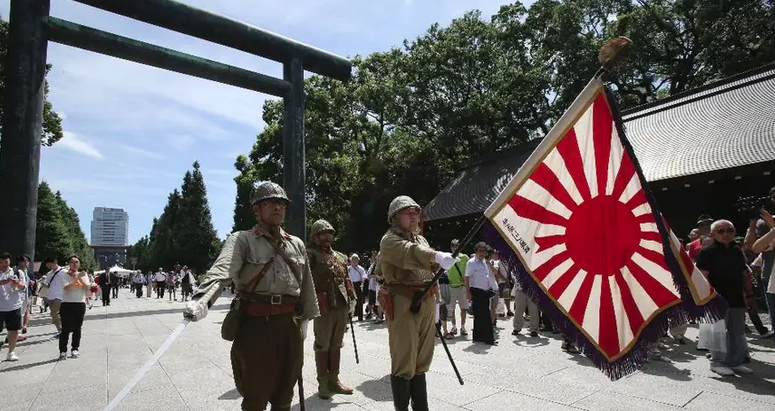 For stations, you have 2 close choices: Kudanshita Station on the Tozai Line, Namboku Line, or Yurakucho Line to the east, or Ichigaya Station to the west. Both are easily within walking distance (under 1 mile). You can also take the JR Chuo-Sobu Line.

Just to the north is another small town called Iidabashi within walking distance with its own station.

The shrine is controversial and is resented by China + Korea because it commemorates war dead considered to be war criminals by those countries (don’t forget Japan invaded both China and Korea in the late 19th + early 20th centuries). Every year around the anniversary of the end of World War 2, both countries decry politicians’ visits to the shrine. In recent years the Japanese Prime Minister has avoided visiting the shrine on the WW2 anniversary.

The shrine grounds are not huge, but there’s a lot to do. There are historical museums, and perhaps, most interestingly, some World War 2 exhibits. Just to the north is Iidabashi, and just to the west is Ichigaya (perhaps most famous for its popular Ichigaya Fish Center). The Imperial Palace and Kitanomaru Park are just to the southeast, and Tokyo Dome City is just to the northeast.

Every July the Matama Matsuri (festival) is held in the stone park area (Marshal Admiral Tōgō Memorial Park) just to the east. With over 30,000 lighted paper lanterns, it’s impressive to say the least. A must-see.

Just to the northeast a bit further is the Otemachi area and to the southeast of that is the main financial district, Marunouchi – all within walking distance.

Just a few blocks to the east is a large park with a statue of Ōmura Masujirō – considered the father of the Imperial Japanese Army. The statue dates all the way back to 1868 (the year of the start of the Meiji Restoration) and survived Allied carpet bombing of World War 2.

If you’re there in the fall, the Ginko trees lining the park light up a brilliant yellow with fall colors.

Map of World War 2 carpet bombing in the Edo-Tokyo Museum. Yasukuni + the Ōmura Masujirō Statue monument narrowly escaped the bombing and are located roughly in the small dark patch between red areas on the left side of the map. Tokyo Bay is shown to the lower right.

Yasukuni Shrine is a beautiful + impressive complex – even if it is entangled in a somewhat less than favorable history of World War 2. It’s a must-see in Tokyo, even if only for the buildings, grounds, and museums. Be sure to stop by.