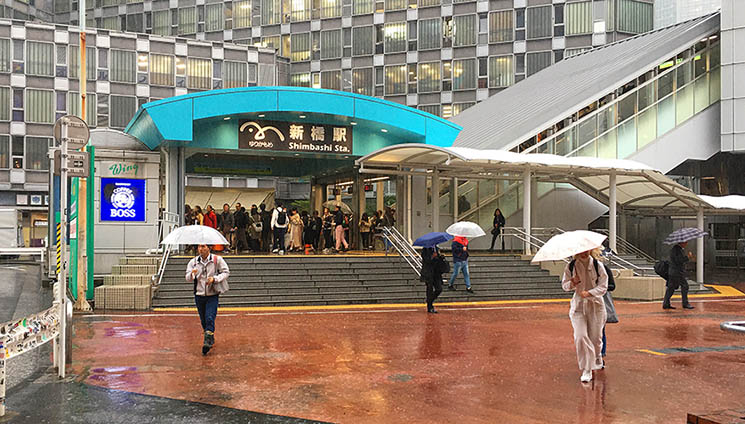 Shimbashi is a major Tokyo area just south of Ginza/Yurakucho in eastern Tokyo. It lies directly west of the world-famous Hamarikyu Gardens, a stone’s throw from Toranomon to the west, and southeast of the Imperial Palace. Just to the east of Shimbashi Station is the eastern termius for the new fully-automated Yurikamome Line which runs in a loop out to Odaiba and many of the other artificial islands in Tokyo Bay.

For the surrounding area, see our other guides on Toranomon, Shiodomé, and Ginza.

Outside Shimbashi Station on the west side facing south. There’s lots to do here. The tall buildings on the left are Shiodomé.

Inside Shimbashi Station near the Ginza Line entrance.

Shimbashi is known for being a quasi-Shitamachi (old city) Tokyo area, but there’s plenty of newer things to do and see in the area.

One of the coolest aspects of Shimbashi is the large number of great hidden restaurants on its backstreets.

Shimbashi Station is one of the oldest in Tokyo – having been built right around the time the new current Tokyo Station was built after the 1923 earthquake. But the Former Shimbashi Station (the original one) is still around and has been restored. It sits between Shimbashi and Shiodomé to the east near the Panasonic building.

Former Shimbashi Station. The Panasonic Building is on the right. If you happen to be in the Panasonic Bldg. also check out the very nice museum inside. The station’s original tracks have been long removed, but the frame for the railway’s overhead outdoor roof is still intact today – along with some of the original buildings, which are now over a century old.

Yurikamome 02 – Shiodome Station. Note the traditional-style pillars on the right.

Shiodomé area. Shimbashi is just to the northwest (left) behind the green Panasonic building in the distance. This photo is facing north. If you head left where the cement truck is, you’ll eventually come to Toranomon. Heading right leads to the waterfront and Hinodé (which is interesting in its own right).

You’ll find all kinds of cool restaurants such as this one under the station.

Any of the lines mentioned above will bring you to Shimbashi. But your best bet is probably the Metro Ginza Line. Also note the Ginza Line has a direct Ginza stop also. The Ginza Line is useful because both termini on either end are easily accessible to 2 other major areas of Tokyo – Shibuya to the west and Asakusa to the northeast.

Shimbashi Station is a large brick above-ground station with an east and west side. The east side is rather small but features some old locomotive parts + plaques. There’s not much to do on the east side as it’s just a block from Shiodomé. The interesting side is the west side which is adjacent to the main area. There’s also an old historical steam locomotive in the square on the west side. You can also walk from any of the areas mentioned fairly quickly.

At first the backstreets can be confusing, but you’ll soon get used to them.

New JR station renovations are being completed as of 2021.

Aside from the main station exits, there are several other street-level exits around the area. One of the major ones is the sidewalk exit right next to a corner drug store called Sugi Drug across the street from the northeast corner of the station around 35°40’03.52″ N 139°45’31.25″ E. This exit is handy because it’s on Rt. 405 which runs east-west into Toranomon to the west. If you head just up the street north of this corner you’ll also find one of the best Korean restaurants in Tokyo on the left.

The Metro street exit right next to Sugi Drug.

As a footnote, if you head 1 block north of Sugi Drug (shown on the right here), you’ll be heading into Ginza if you keep going straight. If you take the crosswalk shown here, just on your left one block up is one of the best Korean restaurants in all of Tokyo: Bokuden around 35°40’06.74″ N 139°45’31.42″ E. The hidden bike park is just to the left, out of frame.

There are several cheap coin lockers around + in the station – one bank is just inside the west exit, one is deeper underground in the station near the Metro platforms, and one is outside on the southeast side under a covered walkway. All are fairly cheap + easy to use.

A bank of lockers inside on the way to the JR and Metro platforms.

The southwest side outdoor lockers. There is also an automated currency exchange machine straight ahead. You can pay for a locker using your Suica or other IC card at the black terminal shown on the right.

Shimbashi Station is center right, just west of Shiodomé. Hamarikyu Gardens is in the lower right corner, the south end of the Imperial Palace is in the upper left corner, and Toranomon is off to the left. If you go far enough north from Shimbashi Station, you will hit Ginza, and beyond that, to the north, Tokyo Station.

The main area just outside the west exit. The retro bldg. on the left was built in the 1970’s.

Just across from the old locomotive outside the west exit of the station is a large Yamada Denki (Electronics) LABi. If you’re looking for a big electronics store in Shimbashi, this is it. It’s across the street from the station around 35°40’02.10″ N 139°45’26.04″ E.

LABi Shimbashi, right. The station is just to the left out of view.

Shimbashi has some of the coolest backstreets in Tokyo. After dark there are endless things to do. Restaurant options are nearly unlimited. You can spend hours wandering around and not see it all. Plan on spending several hours exploring. Shimbashi isn’t a very large area of Tokyo but there is lots to do nonetheless.

Man In The Moon Pub

If you head 2 blocks south from the station, then hang a right west, you’ll come to the very cool area called Toranomon – home to the upscale Toranomon Hills complex. Check out our 2-part series on Toranomon. If you’re looking for a good reasonable capsule hotel, check out First Cabin Atagoyama on the way, around 35°39’51.57″ N 139°45’07.50″ E. It’s tucked down a quiet little side street.

Toarnomon Koffee is just on the right on the 2nd floor of the Torranomon Hills complex. Note the top of Tokyo Tower in the distance.

If you’re willing to walk a mile south to Tokyo’s World Trade Center, you can enjoy spectacular views of Tokyo from the top floor at the Seaside Top Observatory. The WTC is located around 35°39’22.82″ N 139°45’23.91″ E and is easy to get to. If you’re willing to change trains once, you can also get right to its front door at an Onarimon Station exit.

One of the most famous views of Tokyo is this view from the Seaside Top Observatory. Toranomon is just to the right out of frame. The tall bldg. in the distance is the HQ of the Mori Construction Company.

Well that’s it for now. Spend some time getting around Shimbashi and you won’t be disappointed.

Facing the station from the northeast around 3:30 PM – an early sunset in fall.

Under the Shimbashi Station tracks built in 1938.

On the Ginza Line platform.

On a side street near the station.

At the station’s west entrance, right.

Inside the station at night.

Panasonic Shiodome Museum of Art: Up Close and Personal