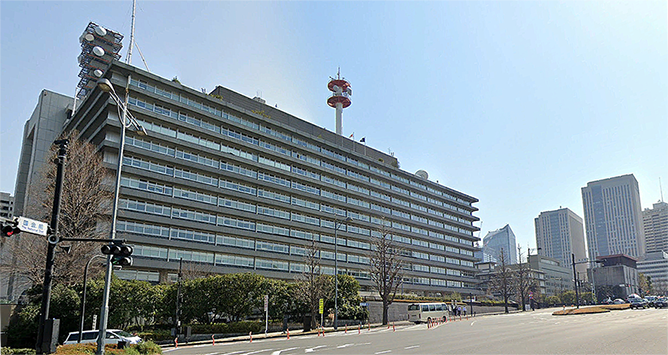 Worth it? If you’re nearby.

Just to the southeast of Kensei Memorial Park and the Japan central gov’t HQ are a cluster of gov’t buildings including the HQ for the Japan Ministry of Foreign Affairs. There is also a Metro station at Kasumigaseki.

Because it’s a large gov’t area, there’s not a lot to do, but it’s still worth a look. The walk around the area and up north towards Nagatcho can be spectacular at sunset. The Imperial Palace, jogging path, and moat are also just to the east.

Around further to south and east are Hibiya and Marunouchi north of that. Just east is the spectacular Hibiya Park.

Also just to the northwest of the park is the nice Akasaka area – see our post Nagatcho/Akasaka Superguide for more info.

To get to the area take the Metro Marunouchi Line, Tokyo Metro Hibiya Line, or Tokyo Metro Chiyoda Line (C-08) and exit at Kasumigaseki Station. The Chiyoda Line has a few more key stops just a few stations away in either direction: namely, Hibiya Station, Ōtemachi Station, and Akasaka Station.

When you exit, you’ll come up to the street just south of the park mentioned above. The Diet bldg. will be just to your northwest.

Toranomon to the South

Just a few blocks to the south is the cool Toranomon area. See our Toranomon Superguide for more info. If you have extra time it’s worth a stroll. It’s only a few blocks’ walk.

Looking southwest into Toranomon from Kasumigaseki at sunset.

Even though it’s a gov’t area, there’s a fair amount to see just by walking around, and at the right time of day, it can be a visually epic area to see. You can enjoy crossing the area on the way between one of the areas mentioned above, or walk around the Diet/park area for some exercise. If you have extra time, be sure to check out the Akasaka area as well. Hibiya Park to the easy is a must-see.

Chōkōsō no Akebono (A film about the construction of the Kasumigaseki Building).